Following the near record take up experienced in 2015 the first quarter of 2016 had a lot to live up to and in a number of ways it didn’t disappoint. 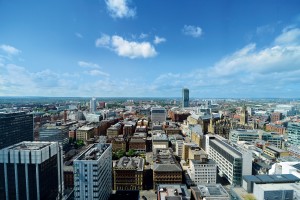 Q1 2016 take up was 196,553 sq ft which although down on the same period last year still included some significant transactions and the picture remains positive with a number of large transactions in the pipeline that will boost Q2 figures. These include the much anticipated 80,000 sq ft relocation by Freshfields Bruckhaus Deringer to One New Bailey.

Approximately 50 deals were recorded during the first three months of 2016 with 35% of total space transacted taken in Grade A accommodation that equated to 69,638 sq ft.

OBI recorded the largest transaction during the quarter with the 28,000 sq ft letting at Allied London’s No.1 Spinningfields to Squire Patton Boggs. The development is due to be delivered in early 2017.

The other Grade A deals included; Kacoo Fashion Ltd who took 25,638 sq ft at Fabrica on the northern fringe of the city centre and Arup who took 16,000 sq ft of expansion space at 4 Piccadilly Place which was recently purchased by Ares and Property Alliance Group. Exciting plans are in the pipeline to introduce new ground floor bar and restaurant operators and a pop-up food and beverage offering.

Q1 2016 saw five transactions completed in deals over 10,000 sq ft with these lettings accounting for 45% of total take up and nine transactions were agreed at rents of £20 psf + which constituted 37% (72,571 sq ft) of total take up. The stats confirm occupiers are still focused on securing good quality space and are willing to pay higher rents in order to secure their preferred building.

Whilst the amount of space transacted may not match last year’s record take up levels there is still a healthy level of underlying indigenous demand and also new businesses looking to occupy space in the city centre. There are also a number of substantial requirements in circulation with occupiers such as Lloyds, Japanese Tobacco International, MoneySupermarket.com, Parsons Brinkerhoff and Swinton Insurance looking to seal moves in the next 12 months.

Of the six buildings currently under construction in the city centre due to deliver approximately 1.05M sq ft of space, 368,040 sq ft of this space is already pre-committed to (35%). There are also a number of refurbished buildings due to be delivered to the market later this year. Driven by occupier’s demands for choice in terms of style, finish and budget these schemes will deliver a variety of floor plate sizes and M&E solutions.

During 2015 concession packages hardened and discount rates now stand at around 15%, equating to 9 months over a 5 year lease or 18 months rent free over a 10 year lease. In some circumstances discount rates of sub 15% are being agreed for sought after space but we expect these to plateau this year and expect rental increases to continue, driven by the increases in headline rents on new build Grade A buildings which currently sit at circa £34.00 per sq ft.

The start of 2016 saw the announcement of the referendum on Britain’s membership of the EU, with the vote set to take place on the 23rd June 2016. The impact on the economy and knock on effects to the property market in England and the wider UK markets remains to be seen but it would appear the investment market has paused for breath due to ‘Brexit’. It remains to be seen what impact on pricing the increase in stamp duty might have but Manchester remains a popular destination for investors looking for an alternative to the overheated London market.