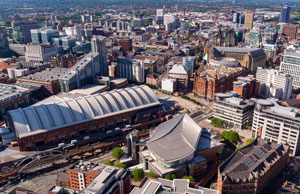 The first quarter take up is traditionally the quietest part of the year, but the start of 2018 saw a significant improvement on previous years. Although transaction numbers only increased by 10%, from 73 deals in Q1 2017 to 80 deals in Q1 2018, the amount of space transacted more than doubled with a 112% increase to 441,000 sq ft.

This take up figure was anchored with the largest pre-let agreed for over a decade, after HM Revenue & Customs committed to a new 157,153 sq ft building at Three New Bailey in Salford. This acquisition is the first phase of the Government Property Unit’s (GPU) new Manchester Hub.

Other significant transactions include Irwin Mitchell (33,382 sq ft) and CBRE’s (11,309 sq ft) acquisition of the last remaining space within One St Peter’s Square and managed workspace operator Work.Life, committing to the ground and 1st floor at Boultbee Brook’s Core where they will open their first Manchester operation later this year.

Four transactions were secured at a rent of £30.00 per sq ft upwards, with the highest being £31.00 per sq ft paid by CBRE at One St Peters Square. We anticipate that a headline rent of £35.00 per sq ft will be secured before the end of 2018.

With Amazon and Moneysupermarket.com and more recently GCHQ rumoured to be looking at opening offices in the city we expect inward-investment to play a key part of demand in the city centre this year.

The managed workspace revolution also looks set to continue with WeWork reportedly in discussion for a third office and other providers including Ministry of Sound, Runway East, Workspace and others looking for opportunities in the city centre.

Carrying on the trend from last year, Tech, Media & Telecoms remains the most active sector in terms of transaction numbers, with 24 deals resulting in 86,235 sq ft of take up. The largest deal in the sector being to Codethink Ltd who took 15,150 sq ft in the Northern Quarter.

At the end of 2017 we anticipated that the number of transactions in the sub-2,500 sq ft size band would reduce, as small businesses and new start-ups opted for managed workspace solutions, such as WeWork, instead of conventional workspace. In Q1 2018, this trend had yet to become evident, in fact, on a pro rata basis it would appear the number of transactions and amount of space let sub-2,500 sq ft has increased when compared with last year.

The supply figure is being boosted by a strong refurbishment pipeline and occupiers off-loading “grey space”. Royal Bank of Scotland’s One Spinningfields Square (160,000 sq ft) is set to come back to the market later this year after they announced they would be consolidating their occupation into Hardman Boulevard.