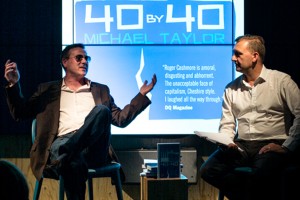 Michael Taylor, the former editor of North West Business Insider, has had a pretty busy 18 months.

He’s worked in a wide range of roles and projects including the highly acclaimed Manchester events programme Discuss, and with corporate finance adviser Seneca Partners.

Michael stood for Labour in Hazel Grove in the 2015 General Election – he lost, but increased the party’s share of the local vote to its highest level in a generation. Since then, he’s taken on a new role as adviser on external affairs to the vice-chancellor at Manchester Metropolitan University.

He has also published his first novel – 40 by 40, a year in the life of Cheshire entrepreneur Roger Cashmore, a book that contains its fair share of property goings-on, most of which will raise a smile, some if which might make some people wince about the way things were in the main days of 2008.

We caught up with Michael.

Give us a brief outline of what the book’s about.

“It’s a comic thriller set in 2008 – where business bad boy Roger Cashmore searches for his elusive 40 million quid by the time of his big birthday. Lots of showing off, casual sexism, greed and, ultimately, humility. A bit like an average Friday night in Alderley Edge.”

It’s quite a moral tale. Do you think business people genuinely learned lessons from 2008?

“I don’t think they’d be as willing to trust banks again, but the world has changed in several other ways too. There’s more emphasis on doing good, having a clear purpose and creating genuine value. Still plenty of hubris and greed about though.”

Property features heavily in Roger’s various wheezes. In your time as editor of a business magazine, did property throw up more than its fair share of that sort of character?

“There was a feeling that the party would never stop. Property does throw up interesting characters, absolutely, and it definitely has more than a fair share of quirks.”

One of the highlights is Roger’s trip to MIPIM – what’s your view on the event? Non-stop party or a place for mature debate?

“It is a party. It is decadent. But it’s also the hardest you work all year if you do it right. Not sure much gets debated. On the occasions I’ve been to MIPIM, I’ve seen plenty of immature debate between cities that didn’t exactly add to the sum total of human understanding.”

Are there any key figures in Manchester property circles you admire in particular? What do you like/dislike about the industry?

“I admire anyone who can make things happen and anyone who can bounce back. For that reason I’ve all the time in the world for Brendan Flood, Stephen Ashworth and Ken Knott.”

What’s the reception to the book been like so far?

“Brilliant, Honestly, it’s been beyond my wildest expectations. I’ve frequently been asked who certain characters are based on. I always say the same thing – if you think that’s who it is, then it must be.”

Any plans for a follow-up?

“Yes, I’m working on a stage play, had interest for a TV adaptation and am writing the sequel. Roger is bored and ready for a new challenge. He stands for parliament in 2015 for the Conservatives in a seemingly unwinnable seat. Thinking of calling it We’re All in it Together.”

You can buy 40 by 40 at local bookshops, from Amazon or via Michael’s blog The Marple Leaf.