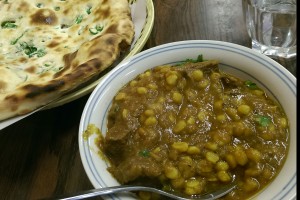 A lot has been written in recent times about Manchester’s quest for a Michelin-starred restaurant. Who cares? They can keep their stars. And if it didn’t mean that the places would get packed out by tourists, I’d ask Michelin to bestow a special award on that most Mancunian food treat: the rice’n’three.

The humble rice’n’three – for the uninitiated, that’s a helping of rice along with scoops of three different curries – is, to my mind, every bit as quintessentially Manchester as Coronation Street. As City and United. As Factory Records, the Hacienda and all that.

As far as I’m aware, nowhere else does this. Not Liverpool, Leeds, Edinburgh, not even London. True, Bradford, Birmingham and Leicester have some mind-meltingly great curries on offer at decent prices and each could stake a claim to being England’s curry capital. But nowhere else has wonderful food from the sub-continent combined with local entrepreneurial spirit in such a way. A budget lunchtime bundle of happiness with a catchy name.

The price is just part of the appeal. Generally speaking, a decent feed will cost you somewhere between £4 and £6 these days. Price-wise, you’ll pay more if you have more meat-based curries than veg, and you’ll pay a bit more at the better known places such as Kabana or Al Faisal. There are maybe ten places scattered around the Northern Quarter, plus a smattering around Strangeways.

Extras – samosas, bhajis etc – come in at a quid or so. No booze. Jugs of water are laid out, and it’s wise to keep one close to hand if you’re piling on the green chillies, which you’ll usually find laid out on the counter alongside coriander.

The range of flavours is what makes it. Lentils and chickpeas done in a way that eludes the home chef, tikka lamb chops to kill for. Marhaba, my curry caff of choice, is the only one with a proper tandoor oven, in which they’ll make your naan fresh to order. Not to have one would be an act of self-hatred. The chilli naan has been known to make my greediest friend weep with joy.

You don’t have to do rice’n’three of course – at Marhaba, my meal of choice is the daal gosht, lamb and lentils (with a naan of course). You make of it what you will. Each place has its own style – at the legendary This & That, the curries are thinner, less flavour-packed. They do offal on a Wednesday and have fixed options for each day of the week. Hunters BBQ do game dishes. On a Sunday, most places do a traditional nihari, big hunks of lamb in a gingery, fiery sauce.

Each place has its own loyal following and the experience can be as solitary or as clubbable as you like. I’ve dived into Yadgar while on the way for a train, because I know I can order, eat, take a breather and be on my way in ten minutes. Then again, I know groups of lawyers, bankers and property developers who decamp religiously to Kabana for a team lunch once a week. At Marhaba, where there are only about four tables, each seating two, you can barely help getting involved in a chat with other punters and the staff.

If I have visitors with me who are up for the slightly rough and ready, I’ll not hesitate in ushering them down Back Piccadilly or Thomas Street. With all due deference to the many decent restaurant operators out there, with all their Manc-music collages, daring wine lists and top notch decor, they can’t match these places for authenticity.

As the gentrification of the Northern Quarter continues, we should all hope and pray these oases of culinary delight remain. That’s not backing the little guy through some perverse contrariness – it’s just bloody good food. Rice’n’threesy does it every time.