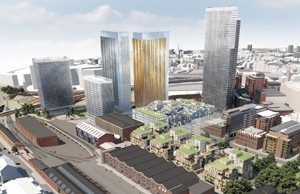 Although there was a sharp intake of breath following the EU referendum, it’s mostly been business as usual in Manchester property circles since, with plenty of ambitious planning applications for residential schemes and hotels. There have also been several events outlining visions for major projects that will change the look and feel of the city in the coming years. The city’s getting taller, for one thing.

St John’s is really important for Manchester, bringing to life an area that has been underused for years. This area was once fairly peripheral, but the success of Spinningfields and the growth of Manchester’s commercial centre have brought it to prominence, with the move of ITV and Coronation Street to MediaCityUK being a further factor in enabling its development. 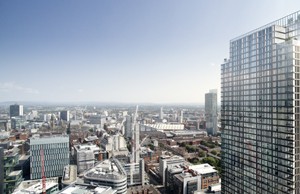 It will be a mixed-use neighbourhood, with neighbourhood being the operative word – Allied London’s vision is for all the elements that proper communities need – shops, health facilities, schools – to be included alongside the commercial and residential elements. The term ‘vertical villages’ has been used, as has next-generation city living for a project that will include as many as 2,500 homes.

The first two residential elements are South Village, which will be relatively low-rise, industrial heritage scale, while St John’s Place Tower will, in the words of Allied chief executive Mike Ingall, be “reminiscent of the first towers in Chicago or New York”. Nadler Hotel is to operate from the lower 18 of the building’s 52 storeys (to provide context, Beetham Tower is 47 storeys tall, while the proposed tower by Renaker at Owen Street on the fringe of the city centre is 66 storeys). St Johns will also see a cluster of three residential towers of between 40 and 50 storeys sold through the PRS model.

Also announced in July was St Michael’s, a £150m scheme backed by Singapore and Chinese investment, fronted by Gary Neville’s property business. It sits between Jackson’s Row and Bootle Street, much of it taking up the former central police station site. As well as three interlinked pockets of new public space, the most striking aspect of St Michael’s is two towers, rising to 21 and 31 storeys respectively, which will house apartments, a hotel and office space. 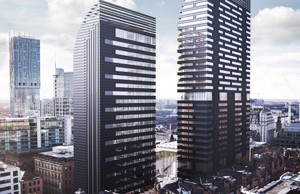 Building tall always raises questions in UK cities, because it’s not something that’s happened a lot historically. Essentially, cities build tall when space is at a premium and as land values have been comparatively low in regional cities when compared to Manhattan or the City of London, it hasn’t ‘stacked up’ financially. There are other factors – in Liverpool, several plans to build tall have fallen by the wayside because they threatened the waterfront’s World Heritage Site status.

Manchester doesn’t have that issue, but that’s not to say there isn’t a historic fabric to think about, an urban context to work within. It’s our view that while there should always be strict thresholds in terms of quality, broadly speaking these projects are massive signs of progress, heralding a stunning change of pace since the late1990s, when only a few hundred people lived in the city centre.

The very existence of plans as ambitious as these tell a story – there’s probably nowhere else in the north of England that they would be considered viable. It underlines the fact that Manchester has arrived as a European city of stature.