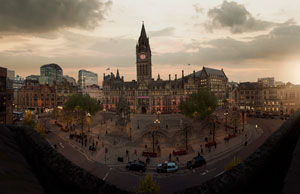 The LJ Partnership has made a big impact on Manchester City Centre’s office market. Based in London, the investment company has a track record of making smart investments in key UK regional cities.

LJ made a splash in summer 2015 when it acquired a cluster of four commercials buildings around Manchester’s Albert Square – properties now branded as the Albert Estate. Victoria Buildings, the Northern Assurance Building, 2 Mount Street and St. Andrew’s Chambers were simultaneously acquired for £16.5m, with 1 Central Street purchased in December 2015 for a further £7m. The five buildings offer 100,000 sq ft of workspace in total. Albert Square is the heart of Manchester, its key gathering point. The space hosts celebrations, concerts, markets and sporting contests, and it’s also the city’s civic heart, overlooked by the glorious 19th Century-built town hall and surrounded by some of the city’s finest period buildings.

“Our strategy is to invest in central locations,” says LJ director Sam Lawson Johnston, and in Manchester it doesn’t get any more central than Albert Square. We were looking to invest in the city and the opportunity arose to acquire the properties in an off-market deal.

Why Manchester? “We’re always seeking opportunities in the regional cities, and we particularly like Manchester – it’s attractive economically and politically. It’s a vibrant city, with a lot of art, culture and sport and great restaurants. It’s a really well-rounded city.”

One thing that sets LJ apart is that it doesn’t invest in new-build properties.

“It’s a key mantra of ours: we do not develop,” says Sam. “We recycle. There are many reasons, but fundamentally, it’s considerably more sustainable.”

George Haddo, a director in LJ’s real-estate team: “One of the things we like about Manchester is that there are great opportunities to recycle older buildings that aren’t being managed to their maximum capacity. With the Albert Estate, we wanted to get the buildings refurbished to a standard worthy of their excellent location and reposition them in the market.”

LJ has worked with OBI’s building and workplace consultancy teams to assess what the Albert Estate required. The refurbishment has involved stripping out unsympathetic alterations added in recent years, revealing the original ornate features.

“We take old buildings and restore them,” says Sam. “We go back to the original design, but add in new air con, lifts, lighting and so on. The space is leasing really well.”

One particularly notable deal came in September 2016 when workspace provider Headspace leased 15,000 sq ft at 2 Mount Street – its first deal outside of London.

The Albert Estate isn’t solely about workspace: in December 2016 footballer-turned-developer Gary Neville announced that he was bringing the Mahiki nightclub brand to Manchester, agreeing a 20-year lease on 4,437 sq ft at 1 Central Street.

“It’s another good example of companies seeing Manchester as an internationally significant location,” says Sam. “Mahiki will be in London, Dubai and Manchester, which is an impressive line-up to be part of.”

Beyond Albert Square, LJ picked up Canada House in Chepstow Street for

£10.5m in an off-market deal. The Grade II-Listed former textile warehouse – in the Art Nouveau style – comprises 72,000 sq ft of workspace, half of which was vacant upon purchase. It’s of a different scale to the Albert Estate, but, as Sam explains, “it’s the same strategy of renovating and then installing high-end technology, creating a dynamic business ecosystem for companies of all sizes. The large floorplates provide opportunities for companies to go on their growth journey with us. It’s really rewarding to support that.”

So what’s next? “We’ll be growing our portfolio,” says George. “We think the regional cities will be strong because the UK economy is diversifying – there’s investment in infrastructure and devolution of power to city regions.”