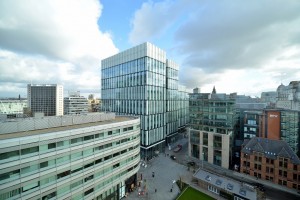 OBI Property has created a short documentary examining the growth of the city since 15 June 1996, the day an IRA bomb ripped through the heart of Manchester. As part of its’ Beyond the Bomb project, OBI also carried out a survey on the main aspects of the city’s growth over 20 years, and convened a round table debate featuring key individuals.

“Manchester must continue to lead on innovation”

The Beyond the Bomb documentary includes exclusive contributions from property figures Tom Bloxham MBE (Urban Splash) and Mike Ingall (Allied London), along with local writer Phil Griffin and Michael Taylor, who as editor of business magazine Insider between 2000 and 2011 observed the city’s growth at close quarters. There’s also insight into where the city goes from here from business leaders including Rob Cotton of NCC Group.

When asked to name the unsung heroes of the past twenty years, Manchester’s people were named most frequently by OBI’s survey respondents, with some respondents mentioning the construction workers working in all weathers and the owners of the small, independent businesses who create the jobs and bring people to the City.

Looking to the future, the survey asked what would be the most important development for the next phase of Manchester’s growth. Airport City polled the highest with 38%; closely followed by St Johns (31%) and the growth of the science sector with 20%.

The survey asked people to choose the best building, best regeneration project and which property business has made the biggest impact on the City since the bomb. Urban Splash polled 43% of the property business votes, with Allied London in 2nd place (35%), Bruntwood 3rd (22%) and the Co-operative 4th (11%).

Tom Bloxham MBE, chairman Urban Splash and features in the documentary said: “I am pleasantly surprised and absolutely delighted our peers have recognised Urban Splash as the property business which has made the biggest impact in Manchester of the last 20 years. It’s been a real privilege to work in such a fantastic city with so many other great developers.”

Beetham Tower came out as the best single building with 33% of the votes, followed by the Civil Justice Centre (27%), Urbis – now the National Football Museum (23%) and the City of Manchester Stadium – now the Etihad (14%).

The clear message from OBI’s roundtable debate was Manchester should continue to challenge convention and embrace criticism in order to capitalise on the achievements of the last 20 years.

Jon Drape, managing director at Ground Control Productions, said: “At the time of the bomb, I was managing the Hacienda and Dry Bar. I remember that right away people in the city’s leisure economy started to speak together about what the city could do. Culture from a very early stage was a key part of the city’s post-1996 plan.”

That cultural growth, ultimately leading to the establishment of the Manchester International Festival, had its roots in the building of the Bridgewater Hall, which held its first performance in 1996.

Janine Watson, at that time a Manchester Evening News reporter and later a senior figure at Manchester City Council, said: “The development of the Bridgewater Hall showed that this was a city prepared to invest in world-class cultural facilities to drive its economy – that was groundbreaking at the time. And all the businesses involved in the reconstruction task force sent their bright, promising youngsters – it felt important. There was a real sense of possibility.”

“The swathes of regeneration and physical change in the city since 1996 can be attributed to the civic leadership’s ability to channel that spirit,” said David Lathwood, international director at JLL:

“Everything we’ve seen developed since is the proud legacy of the political will that was being built up through the 1990s. That political will enthused people involved in property. Manchester never let go of that spirit of optimism. Investors come into Piccadilly and feel something that they don’t get in Birmingham, Leeds or Liverpool.”

Will Lewis, co-founder, OBI Property, said: “I came to the city in 2005 because it felt energetic, the obvious choice. What we’ve seen in the last few years is that developers and landlords have grown in confidence. The challenge for Manchester now is to keep adapting, because business has moved beyond the conventional ways property has been used.”

Nick Johnson, one of a grouping of bar and music industry entrepreneurs, property developers and architects who influenced change in the city, leading to him becoming chairman of Marketing Manchester in the mid-2000s, said: “What an atrocity like the 1996 bomb does is unite people. The city at the time was open to being self-critical, to listen to the alternative ideas of those who disagreed, and then channelling those thoughts. That spirit is vital if Manchester is to make itself a truly world-class international city.”