Are you planning to grow as a business in 2016? According to the recent Business Occupancy survey by the law firm Irwin Mitchell, slightly more than one in ten companies are looking to move to larger premises in the next year to accommodate their growth strategy.

The exact number – 12.4% of a total sample size of 255 companies nationwide – is not actually a huge amount, and suggests that a lot of companies who’d had to let people go during the downturn have still got space to fill within their existing premises.

It might also suggest that companies are exercising a degree of caution – across the country economic recovery isn’t uniform, with bad news such as the steel plant closure in Middlesbrough acting as a counterweight to the booming South East and inward investment success stories around Manchester, which in our view has emerged as the north’s dominant city region.

But maybe it also suggests that growth isn’t just about adding to the headcount. And even where getting new faces in and building the team is a part of the story, it’s about better use of space and more flexible, modern ways of working.

Most of the clients we work with don’t want rows of desks, a token meeting table and a boardroom these days. The vast majority are open-plan to a greater or lesser extent, even in sectors where privacy and discretion are required – because with good design, all that can be factored in.

It’s very easy to underestimate just how far we’ve come in the last five or ten years. In 2005, we’d be willing to bet the fax number on your business card was more than just a token presence. You had piles and piles of paper on your desk – you received PDFs of things, but “liked to have it there in front of you”.

In a sense, those of us who once went to work in the old-style office environment and are now working in the open age office are the belt and braces generation, where even when you know you’ve got a digital copy, you feel more reassured with a physical copy too. We’re all getting used to changing. My colleague Will Lewis blogged here about how Generation Y are increasingly becoming the most influential when it comes to the way we work, and that’s something that will only become more and more apparent. 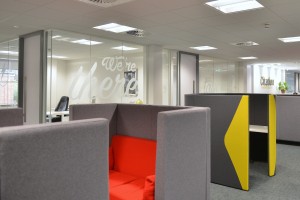 Intelligent, well-planned use of space will continue to be key in 2016. OBI have been working with Myerson, a law firm in Altrincham, on designing an office that will allow them to bring three locations into one. There are meeting rooms, walled with decorative glass that provides both discretion and light, and there are also less formal meeting spaces in the form of pods, with insulated baffles placed above so that sound doesn’t carry. Desks are in nests placed at 120 degrees, rather than lined up in what partner Carl Newton calls ‘neo-mills’. And we’ve turned some rather blocky stanchions into features with some neat design.

Although each of our projects, such as Citation, Rentalcars, and Myerson are unique, the common themes are flexibility and openness. We’re already busy on delivering more exciting new spaces in 2016.