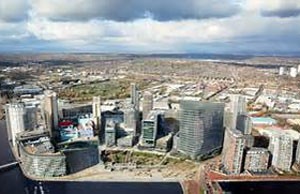 All eyes turned to MediaCityUK recently after its £1bn expansion plans were granted planning permission. Owners Peel Land and Property and Legal & General Capital have been given the go-ahead to double the size of the media-centred Salford Quays business district, with the ambitious plans for phase two including 540,000 sq ft of office space, 1,800 apartments, retail and leisure areas and public spaces.

In the past decade or so the local economy has undergone a significant transformation that has seen the area establish itself as a European centre for digital and creative industries on the back of broadcasting giants the BBC and ITV moving in. From this platform, accelerated growth can be achieved in the coming years, as set out in the strategic framework for the area.

Approximately 250 creative and tech SMEs are now located on the waterside setting. The University of Salford is also a key occupier, part of a long-term plan to develop skills for the digital and media industries. Over 7,000 people work, live or study at MediaCityUK, a number expected to double over the next decade.

The area could potentially grow more quickly than anticipated when taking into consideration the new transport investment in HS2 and HS3, improving links to areas across the so-called Northern Powerhouse, as well as London. 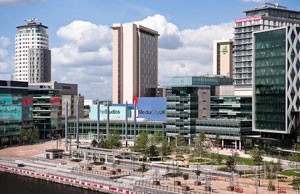 The developments around the vicinity have helped it to become an area to live, work and play. Furthermore an ever-improving infrastructure that supports accessibility to Media City means a commute to Manchester city centre is less than 25 minutes. In “world city” terms that’s nothing at all.

Managing Director of MediaCityUK, Stephen Wild has a clear vision, describing MediaCity UK at the launch of the £20m Tomorrow building in September 2016 as “both a thriving business and leisure destination”. On the leisure side, the number of hotel rooms is growing, while destination cocktail bar and restaurant The Alchemist will join success stories such as The Dockyard. The Lowry Arts Centre nearby continues to be a major draw, as does the Lowry Outlet shopping centre.

MediaCityUK has a strong appeal for companies looking to link with the area’s growing digital and tech clusters. Companies have looked beyond London, including big brands such as the BBC, ITV and Ericsson, as they seek places with bright young talent, that are more sustainable and cost effective.

There are some great opportunities to grab a piece of the action, with the Tomorrow building, Orange Tower and White Tower attracting interest from around the country.

In January 2016 Digital Catapult, the body responsible for growing the UK’s digital economy, announced that MediaCityUK digital enterprise hub The Landing would be the first Manchester-based partner for its new strategic partnership programme, plugging into a national network of tech clusters.

Salford Quays has already played an important role in one phase of the Manchester story. Digital and tech businesses based at this historic yet futuristic setting are leading the way for growth in the region. The MediaCityUK story has only just begun.