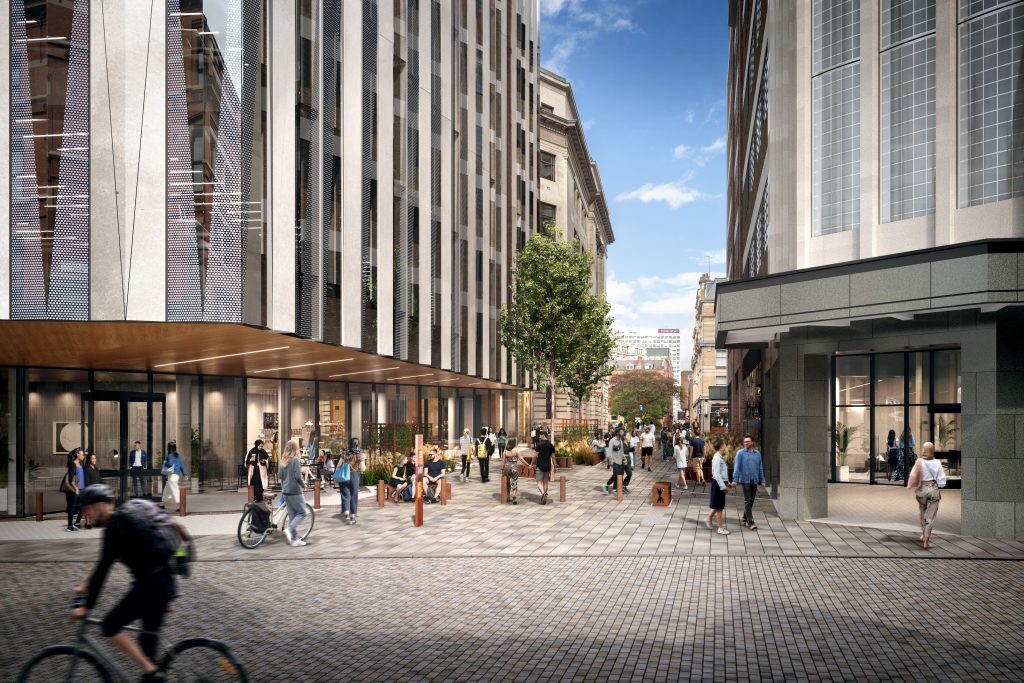 New plans to transform Manchester’s iconic ‘Kendals’ building on Deansgate into world class offices have been unveiled today, with the scheme expected to play an important role in creating jobs and kick starting the city centre’s economic recovery.

The proposals, which have been brought forward by the site’s owner, Investec, and designed by Manchester-based Sheppard Robson Architects, will seek to add around 500,000 sq ft of much needed quality office space by reviving the Grade II Listed Kendal Milne building – currently home to House of Fraser – and completely replacing the multi-storey car park building behind it.

Affectionately known as ‘Kendals’ to Mancunians, the Kendal Milne building was purpose built in 1939 as a department store. But with retail of this scale facing a highly uncertain future, even prior to the current health pandemic, the office proposals are seen as an opportunity to safeguard the building for the long term. The scheme would still deliver a generous and more sustainable amount of retail space on the lower ground floors, continuing the important retail and leisure-focussed frontage along Deansgate.

If redeveloped, the site is expected to support almost 4,000 jobs in total – including around 420 retained in the retail sector – and inject over £300 million into the local economy every year. Over 1,600 jobs would also be created during the construction phase.

Investec appreciates the popularity of the art-deco-styled Kendals building. While some new elements, such as new glazing and a rooftop extension to add more floorspace, are essential to creating a modern, light and financially viable office, all design interventions have been through a robust options assessment to ensure they complement and enhance the existing fabric of the building.

To the rear of Kendals, the outdated Fraser Building with its multi-storey car park has long been an obstruction to creating a more attractive and accessible environment in the St Mary’s Parsonage neighbourhood. Under these new proposals, the block would be demolished and replaced with an architecturally striking, sustainable new office building that is more in keeping with Manchester’s ambitions.

Removing the multi-storey car park supports Manchester City Council’s zero-carbon vision and enables a complete re-thinking of the surrounding streets – where pedestrians and cyclists will be prioritised. New office entrances on King Street West and active frontages will transform the streets behind Deansgate from uninviting back streets to light, welcoming public spaces.

“Our starting point for this project was to celebrate the Kendals building and ensure it remains an iconic focal point of Deansgate for many years to come. Investec has a strong track record of taking innovative and decisive steps to secure the long-term future of its assets and creating world class destinations.

“Pairing this revitalised early twentieth century heritage building with a new build, which demonstrates the best in modern architecture, will deliver a completely unique and landmark city centre office campus – one that responds to emerging trends for flexibility, sustainability, character and wellbeing.

“This is a significant investment in the city of Manchester. The proposals respond to the St Mary’s Parsonage Strategic Regeneration Framework and would lead the way in the district’s complete transformation.”

Will Lewis, Founding Director at OBI Property and commercial agent for the scheme, added:

“Despite the economic headwinds, we are seeing sustained demand for new Grade A office space in prime locations within the city. Although working patterns are changing, the long-term impact of Covid-19 is likely to see even greater demand for high quality office space which prioritises the health and comfort of its occupiers, while offering access to leisure and cultural amenities.

“The incredible location and specification of this development will help the city continue to attract major international businesses – creating and retaining many jobs – and greatly contributing to Manchester’s post Covid-19 recovery.”

A pre-planning application public consultation on the proposals will run until 30 October. Local businesses and communities are being invited to view and comment on the plans here: www.kendals-deansgate.co.uk

Following this consultation, the submission of a planning application is expected later this year.