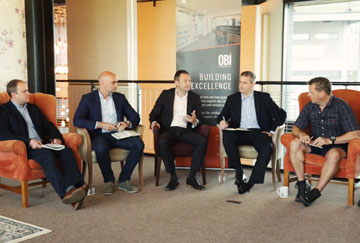 Manchester is the largest digital and tech hub in the UK outside of London, and earlier this year was named in the European Top 20 for the first time.

We gathered some of the city’s key players – established players, start-ups, space providers and professionals from property and finance – to look at where the city’s at, and what it needs to do to establish itself firmly in the lexicon of top international tech locations.

What we found were some big points on how to tackle the skills issue, reassuring views on the property and business support side, and the growing feeling that a “pay it forward” mentality is taking hold in the sector.

Damien Hanson, Circle Loop: “From a start-up perspective, there’s a lot more support than there was, with initiatives such as Tech North. What I took from Manchester’s tech sector trip to San Francisco was collaboration, rather than fear of competitors. The ecosystem there harnesses sharing and knowledge transfer at a deep level, there’s a ‘pay it forward’ mentality. We need more established businesses to support start-ups.”

Lawrence Jones, UKFast: “Manchester beats London every day of the week for start-ups. Investment and support from entrepreneurs is happening more than people realise, 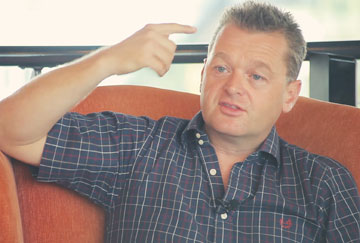 but it’s under the radar. We also need to invest in developing people – UKFast started an apprenticeship programme and it’s given us some phenomenal people with incredible loyalty. If every business did something similar Manchester wouldn’t have a skills problem. And while it’s a ‘nice’ thing to do, the key thing is it makes commercial sense.”

Nick Rhind, CTI Digital: “Manchester’s got a strong digital economy, but focuses too much on London – linking better with Sheffield, Leeds and so on would be better. Working more closely together would give us a stronger offering. The biggest issue in Manchester is talent, and better transport infrastructure across the north would allow us to hire people from a wider area.”

Mark Robinson, MediaCity UK: “What we’ve tried to do is not just put buildings up, but take a more sophisticated approach, creating a community around digital and tech. The Tomorrow building launched in September, and we’re seeing companies that were two-man start-ups in the Greenhouse now employing 20 and moving on within the area.”

Maya Dibley, The Landing: “We offer everything a growing business needs under one roof, with desk space and areas to meet other businesses, along with the On the Seventh private members’ club. A business can hold an event for investors using all these things, it’s a professional environment. Location-wise, we’re five minutes from Chorlton, where a lot of creative people live, and easy to access from outlying areas too.”

Richard Lace, OBI Property: “What landlords and developers now realise is that businesses need ‘solutions’ more than ‘buildings’. We work with tech businesses that have grown from 30 to 300 people within a couple of years, so they need flexibility. Traditional investors would look at profit and loss, but these businesses pile profit back in, so a different model is needed. Peel and others have reacted well to that.”

Richard Faulkner, Barclays: “We’ve been in the digital and tech sector for 30 years. Along with centres of excellence such as Cambridge, Manchester’s absolutely seen as one of the strongest cities outside London and should have the confidence to do its own thing. Barclays opening Eagle Lab here, as well as the Rise co-working space shows the confidence we have in the city.”.

Jerry Krylov, Athletec: “We’d originally gravitated towards London, but my business partner is from Manchester and the opportunity made sense – the rent is cheaper, there are interesting people to work with, we have a lot of London meetings but it’s only two hours away. MediaCity felt like a really good hub and it’s growing all the time. Having Eagle Labs here is beneficial to us.”

Darren O’Brien, Eagle Labs: “We’re here to help businesses grow quickly, providing the specialised facilities that can make concepts become reality, allowing products to be tested and developed before they go to market. In the time we’ve been running, our reach has spread far and wide, it’s about more than just Greater Manchester.”