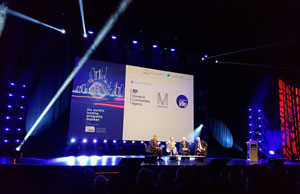 This was the first time I’ve been to MIPIM, the world’s largest property exhibition, and it didn’t disappoint. You hear so much about it from colleagues and clients that you almost know what to expect, but the scale of the event is still surprising – as is the amount of useful work you can get through in the right frame of mind.

OBI has been a part of the Manchester delegation for a few years now, and right away from the first event on the Monday evening the Manchester pavilion was buzzing with positivity.

The pavilion was about as far removed from what people might expect an exhibition stand to look like as you can imagine – with a stage and high class AV set-up at one end, a café at the other and a kind of art gallery showcasing key projects in the middle, it was something that showed the city in a great light, comparing well to anything else on offer.

There were some great sessions through the week. The insight into Mayfield, which is still making its way towards a detailed masterplan, underlined how central the Piccadilly gateway is to the city’s leaders. Sir Howard Bernstein pointed out the game-changing possibilities inherent in the combination of this site, the London Road Fire Station and the University of Manchester’s north campus.

It was noticeable that more so than other stands, Manchester’s was attracting more delegates from not just other UK cities, but European cities too. That was partly due to staging panel sessions with contributions coming from senior figures in Stockholm, Barcelona, Antwerp and Amsterdam, but the fact that Manchester goes the extra mile to do this shows both how hard it works at MIPIM and how forward-thinking it is.

The science strategy that has been coming together over the last few years is now clearly reaping dividends in the developments at Citylabs, Alderley Park and the Sir Henry 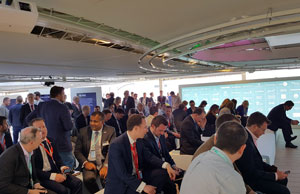 There was something in every session we saw for delegates to take away but two of the best-attended were St Michael’s, on which Gary Neville provided an honest, forthright update; and St John’s, where a new fly-through video was revealed showing how the various components of this new city district are coming together.
The residential blocks are falling into place, and the Factory, a new cultural focal point for Manchester, is well on the way. April will see the launch of the Enterprise City element of the scheme, which promises to be very special.

The things people told me about MIPIM beforehand were all true, You’ll stay up late, you’ll get through more chance meetings and five-minute catch-ups than you thought possible, you’ll come home feeling like you’ve walked up several mountains.
They also say the hard work starts now, in following things up and putting what you’ve learned to full use. It felt like a very good MIPIM for Manchester – it certainly was for OBI.